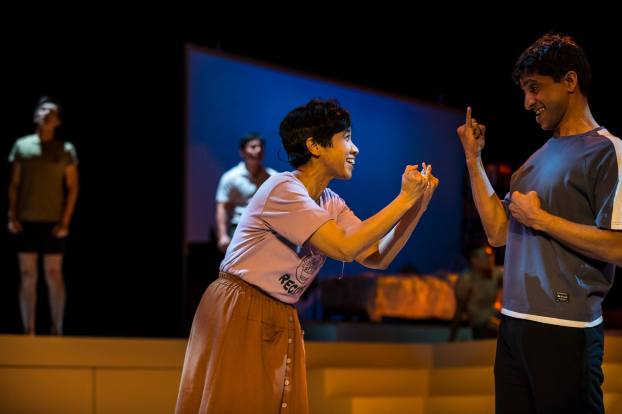 Much ink has been spilled on Haresh Sharma’s Off Centre ever since its first staging in 1993. The reviews have two common threads: the play being on-target about mental health issues, and the tragedy of the play still being pertinent after so many years.

To add, it is also a sophisticated play which touches on issues of different economic backgrounds, societal expectations, Singapore’s competitive school system, and national service, without being tedious. Furthermore, the several instances in which Vinod or Saloma questioning the audience directly might be a little shocking for audiences back then, who are probably  used to having the fourth wall in place.

All of that is brought to the fore in the latest staging by The Necessary Stage, as director Alvin Tan stays true to the original staging, except for having a slightly more elaborate set by Wong Chee Wai.

Abdulattif Abdullah (Vinod) and Sakinah Dollah (Saloma) reprise their roles to much aplomb. Apart from the difficulty of embodying behavioural ticks brought on by severe depression and schizophrenia respectively, they have to constantly toggle between being in character and stepping out to narrate or address the audience. The ease at which both actors achieve this seem to signify that their characters are not too far from us.

Apart from their technical flair, both actors handle the emotional scenes with a great deal of sensitivity, giving the seemingly simple words much nuance.

While I would have liked for the play to be updated in terms of references and staging, I acknowledge the merits of being faithful to the original staging to mark the show’s anniversary and being a reference for students taking their O and N level exams.

Undoubtedly, most of us would feel uncomfortable about how relevant the play still is, but what is more troubling for me is that it is not as hard-hitting for the modern audience as it probably was for our counterparts in 1993.

With a more theatrically sophisticated audience, the direct questioning seems a little crude. Furthermore, both Adulattif and Sakinah seem to direct them at a general direction rather than directly at a particular audience member.  Thus, as Saloma pleads with the audience at the end, one is filled with dread that nothing is going to change.

Being timeless or evergreen is a compliment when describing most plays, but it is certainly not so for this one. One hopes that the play’s concerns will be deemed as dated and irrelevant by the time a theatre company considers another restaging.

“Off Centre is still spot on” by Akshita Nanda, The Straits Times Life!

“[Review] Off Centre overwhelmed by nostalgia” by Sam Kee, ArtsRepublic.sg

“Review: Off Centre (2019) by The Necessary Stage” by Bak Chor Mee Boy 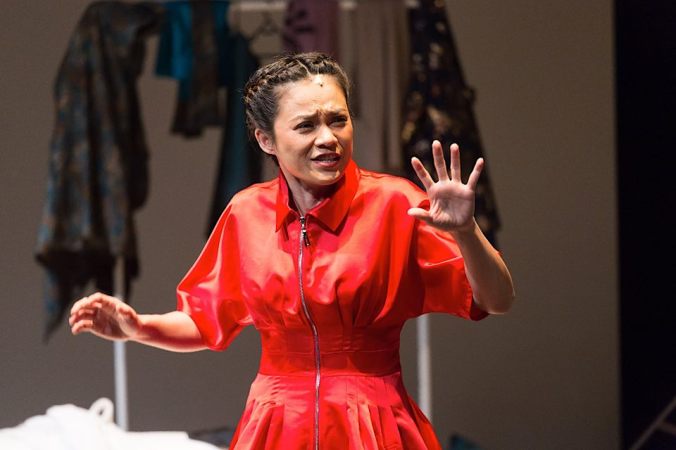 What could be more narcissistic than staging a solo show about one’s life and career? At best, it is an extravagant CV. At worst, it is a navel-gazing alternation between woe-is-me and look-at-me.

To avoid that trap, playwright Haresh Sharma creates a character which can be described as a version of Yeo Yann Yann in a nearby possible world. For sentimental readers, Yeo plays a character that could have very well been her, had the stars aligned a wee bit differently.

This blend of fact and fiction is not merely a device to avoid criticisms of vanity, but it also allows inter-textual possibilities that capture a slice of the local and regional theatre, television, and movie industries of the ’80s and ’90s. To ground the play in the reality of the character, Sharma ensures that some of these references also reflect the main difficulty of the character dealing with the difficulties of having a child at 40, and how best to balance between motherhood and her acting career.

As such, we have a deliciously complex play that is shot through with meta-theatricality. One could spend hours teasing out the dynamics of life imitating art and vice versa within the reality of the play, and the references to the different roles that we play in various aspects of our lives.

Yet, at another angle, the show is Yeo’s performance CV. Every second of the show is solid proof that, given some time, there is absolutely nothing that she cannot do. Her energy and flexibility disguises her age, while her virtuosity celebrates decades of hard work and experience.

She seamlessly transits from a comical to a poignant moment as if she were casually throwing on a scarf. With Sharma’s writing and Alvin Tan’s direction being quite relentless in this aspect, a lesser actor—or any other actor for that matter—might end up tying a noose with that scarf.  She also manages to breeze through a whole range of characters, and display a sense of ease with a whole spectrum of acting styles.

Underlying all these is a keen sensitivity which is also manifested in the way she handles Cantonese, Hokkien, Mandarin (both standard and a colloquial way of speaking that is unique to Malaysians), and English. At this juncture, it is important to acknowledge Quah Sy Ren’s robust translations as we are predominantly hearing his words throughout the show.

In the press conference scenes which bookend the show, Yeo’s character teasingly admonishes the press for being nosey about her personal life, but requests them to give the movie as much coverage and as many positive reviews as they can. Usually, I will bristle at such blatancy, but Yeo and The Necessary Stage (TNS) have stripped me of any reason to do so.

Indeed, Actor Forty is a splendid celebration of Yeo’s career and TNS’ 30th anniversary. The company now finds itself in the unenviable position of trying to match this show for the rest of their 2017 season. But of all problems that one could have, this is one that is most welcomed.

“Nobody will write a review for you” by Jocelyn Chng, Centre 42 Citizens’ Reviews