Partly due to the current zeitgeist, and partly a coïncidence of production timelines, there have been a slew of shows eager to address issues of gender, harassment, and abuse since last year. A common approach, at least in the shows I have caught, is to state various facts and declare the need for reëducation.

Apart from it being an experiential installation rather than a conventional theatre performance, Flowers (conceived by Han Xuemei in collaboration with playwright Jean Tay, lighting designer Lim Woan Wen, and sound designer Darren Ng) is refreshing because it is more intent on asking questions.

Set in a house within the Holland Village area, audience members are given a cassette player as they listen to a recording of a monologue delivered by Ann Lek, and they wander about a two-storey house for 70 minutes. The monologue details the fraught relationships a woman has with her parents and brother; the known but unspoken violence her father unleashes; and the different expectations placed on her and her brother.

The audience is thus cast as voyeur, investigator, and confidant all at the same time, as we are allowed to open any door and drawer within the house. The quotidian artefacts soon take a life on its own, telling not just the history of the inhabitants, but becoming symbolic extensions of the monologue. For example, the numerous photographs from Officer Cadet School in the brother’s room do not merely tell us that he has served national service, but it also echoes ideas about masculinity and expectations placed on young men.

As such, the physical act of exploring the house parallels the self-reflection that one undergoes. This is enhanced by the evocative, but reticent monologue. If you are expecting a dramatic recount of a violent episode, you will be disappointed. However, the suggestions within the monologue gives one space to fill up the details, perhaps from your own experiences.

This also expands the notion of violence, and how it can be coloured and complicated within a familial dynamic.

The master stroke of the piece comes when, while wandering about, you suddenly chance upon an actor playing the father. He never acknowledges the presence of the audience, but potters about the house, cooking, washing dishes, watering the plants, and watching television.

This sudden inclusion opens up an opportunity for confrontation or reflection. I found myself silently observing the father for any traces of violence, or, at the very least, impatience. My endeavour failed and I soon wondered what I was hoping to achieve.

Why should there be a clear-cut cause and effect? Is the father necessarily a monster, even though he committed a heinous act?  Does the mother have any agency in this dynamic? Where does the buck stop? Do we all also enact violence in our moments of impatience? How do we stop the perpetuation of violence in all its guises? Is it simply a matter of education?

In the cacophony created by stomping on soap boxes and declamations from high horses, the gentle prodding and a space to pause and reflect, as offered by Flowers, may just be a start towards a more productive and sympathetic solution.

“The Wars We Fight in Silence — FLOWERS: Review” by Cheryl Tan, Popspoken 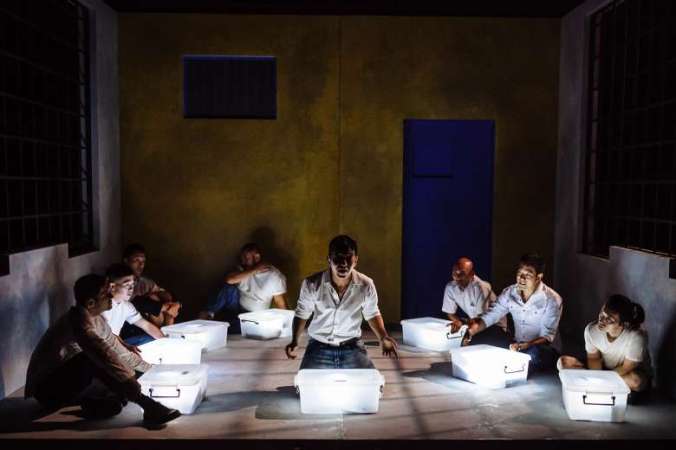 Two years ago, I was profoundly affected and had my pre-conceptions about ex-prisoners challenged by Dark Room x8.

The memory of its impact makes me apprehensive about watching this iteration. What should one expect of this second staging? More importantly, having been made aware of my prejudices, will Dark Room still have an impact?

I am happy to report that most of my impressions of the first iteration apply to this one as well.

In the midst of my apprehension, I forgot a simple truth. Regardless of what one knows, there is a sort of power in having someone stand in front of you and tell you a story. And the stories told in Dark Room—that of the prison system, and how it affects the individuals—need to be retold again and again.

While there are some changes in the main ensemble (Nelson Chia, Timothy Nga, Erwin Shah Ismail, Ian Tan, Mohd Fared Jainal, Noor Effendy Ibrahim, Oliver Chong, and Pavan J Singh), the performances by this batch of actors are equally stellar. The complexities of script are deftly handled as the show organically shifts from poignancy, to hilarity, to the downright painful.

Chris Chua’s set, which consists of three structures that can be cleverly configured into the prison cells and walls, is a much welcomed addition. It vividly impresses on the audience the small space that the prisoners inhabit, and its possible psychological impact.

That said, this fuller rendering also has its excesses.

Director and writer Edith Podesta took on the audiences’ earlier feedback by introducing the perspectives of a female inmate (Shafiqhah Efandi) and the parents (Lim Kay Siu and Neo Swee Lin) of the prisoners. However, they are tokenistic at best.

Apart from learning two new facts,—female inmates man the call centre, and yard time is not a regular occurrence—the female inmate does not add anything to the show. Podesta also does the character an injustice by not giving her an identifiable personality which is present in the male characters.

Similarly, the parents’ perspective only focuses on their sadness, and the difficulties of visiting their child in prison. All these are not really new insights and could be easily imagined by the audience.

Additionally, certain sound effects by Darren Ng—such as the banging of the judge’s gravel— are too literal and gimmicky. This takes away the gravity of the text which can be competently conveyed by the actors.

Finally, the ending which has the characters repeatedly imploring the audience not to judge too quickly risks being overbearingly didactic.

Despite all that, the beauty of Dark Room is that the issues raised in the piece will always be pertinent. This gives Podesta countless opportunities to re-stage it, and find the right balance for the show.  What remains is for her to trust her artistic instinct and be very selective of which suggestions to bring on board.

“Edith Podesta and The Studios’ Dark Room is an immersive and intimate retelling of life in Changi Prison Complex” by Karin Lai, Today

“Struggling with the Outside from the Inside” by Alisa Maya Ravindran, Centre 42 Citizens’ Review

“Dark Room by Edith Podesta at The Studios” by Corrie Tan

“Architecture of Empathy” by Dumbriyani