The third instalment of Baca Skrip features Aidli Mosbit’s Ikan Cantik which meditates on issues such as the historical (mis)representation of women; gender roles and sexuality; women in popular culture and the biases; and privileges of female power dynamics.

To find out more about the processes that go into present an online reading via Zoom, I interviewed some of the actors involved (Farah Ong, Suhaili Safari, Rafeyah Abdul Rahman, Elnie S. Mashari) in the presentation.

Could you give us some insights as to what the rehearsal process was like?

Farah Ong: Reading. Just listening to the voices and tapping into those memories from a long time ago, and re-creating some experiences. There are a lot of technical details involved: checking of sound, angling of camera, and testing the intensity and colour of the lighting.

Suhaili Safari: The rehearsal process has been very technical when it comes to setting up our space every night. Having it being consistent especially with lighting and sound makes it easier for us to make a good show.

Rafeyah Abdul Rahman: What goes on behind the scenes is amusing. My rehearsal space is filled with costume and makeup on the right and IT peripherals, wastepaper basket (and snacks ssshhhh) on the left. The blinding ring light is in front of my laptop. Being older, presbyopia is a bane. Otherwise, getting on board and switching into character is easier than connecting through zoom on a weak wireless connection.

Elnie S. Mashari: Rehearsals started a month ago, with five or six sessions lasting two hours each. It was pretty refreshing to get into a “rehearsal” mode after months of not being actively involved in a production. It took a couple of sessions to get into the flow of the rehearsal process. It  would take 30–45 minutes to set up the technical elements  before the actual read. The session would end with a round of notes. While we plan for our rehearsals to last for two hours, it would usually stretch to three, which is fine as we had nowhere to go except to sleep after that.

What were some challenges you face, especially when you are not in the same room with the rest of the cast and crew?

Farah Ong: The technical part is really challenging. The internet connection determines how you’re gonna sound, whether it’s going to lag. So, it takes a lot more energy and focus and listen. It’s listening plus something else.

The satisfaction is completely different, of course. Rehearsing on Zoom takes away the joy of human connection. So, your brains got to work double and triple hard to process.

Suhaili Safari: While needing a consistency in the quality of lighting and sound, sometimes we have to deal with unannounced noise bleeding from our environments because we are playing in our own homes . We also have to work with the latency of visual and sound when our network gets wonky and our Bluetooth earphones run out of power. Basically, we got to get our technology right at its peak at all times which is the main challenge of making online live shows. Besides that, having it directed in a tinier space made me feel claustrophobic, but that’s only because I had to think outside the conventions of stage playing and more of working within the idea of probably what film/TV would entail like eye line in film acting.

Rafeyah Abdul Rahman: Synergy. But fortunately, it’s a read. Nevertheless, the lag in connection requires a lot of waiting and patience from cast and crew. What’s interesting is that we get to use digital apps to get things up and make things work when otherwise it’ll purely be us on stage.

Elnie S. Mashari: I guess getting into a robust or an active discussion is hard because rehearsals were done over Zoom, and we we would not be able to hear each other at all if we accidentally talk over each other. It is like being in class, where we need to raise our hands before we share our opinion. 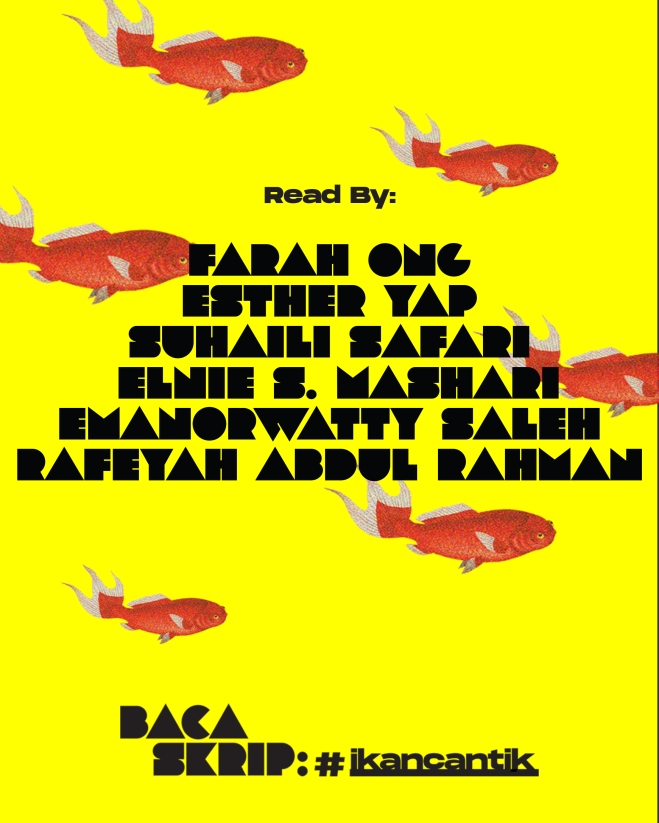 Has this process made you look at the piece that you are involved in a new way? How so?

Farah Ong: It’s interesting that all these issues are probably still happening now. Just in a different language and vocabulary. The root of the problem and the issues are still the same. I guess humanity hasn’t evolved that much, you know…This whole Zoom process makes me miss the actual rehearsal and creation process of making theatre in general.

Suhaili Safari: Well, this is my first time working with #ikancantik as opposed to the rest who are revisiting it. Finding relationships with characters of actors I’ve not worked with before from behind my laptop screen made me imagine myself in a fishbowl and talking to fishes from other fish bowls.

If this is rehearsed as a show rather than a script read, I wonder what dynamics will need to be in place to highlight relationships of characters without having them meet in the same space?

Rafeyah Abdul Rahman: It gets cast and crew to think of solutions that befit a zoom read. We have to lift the words off the script and how to do that without ‘acting’? Mastering the text and improve on eloquence—thus providing depth for each word, phrase, and sentence. The script still feels light-hearted but belies the weight of so much research, careful representation and deliberation.

Elnie S. Mashari: It definitely opens up a new perspective into performing for Zoom  or acting for a live-stream. The stage version allowed us to express ourselves more with body language and gestures. For Zoom, we need to capture our emotions and intention within that single frame. Using only our voice, facial expressions and upper body reactions. This gives me the tool to access insights to the character’s psyche and the sensitivity required in the delivering of the lines. I think that’s the main new change I experienced.

In addition, 22 years have passed. Our collective years of experiences have provided new insights to the issues raised in the 1998 production. We have now a bigger pool of information and experiences to support our choices for the characters.