To kick off their 2018 season, Checkpoint Theatre presents Thick Beats for Good Girls. To find out what exactly are “thick beats” or “good girls”, I decided to interview writer-performers Pooja Nansi and Jessica Bellamy.

Both of you come from different cultures. What do you think is your culture’s view of what constitutes a good girl?

Jessica:  A good Jewish girl is respectful. She doesn’t draw too much attention to herself. She accepts the rules taught to her by her community. She is, of course, allowed to have fun, to express herself, to find joy—but she is also very aware of how her community might feel about some types of behaviour being more acceptable than others.

Pooja: A good Gujarati girl knows how to make the perfect rotli. She puts her community before herself and considers how others will see her before making choices in the way she dresses, who she dates and the things she chooses to say.

What was your first encounter when you were told or felt that you did not fit into society’s definition of a good girl?

Jessica:  Before I started making theatre, I was in a Jewish monoculture “bubble”. I went to a Jewish school and had Jewish friends. It was only when I took up student theatre in university that I encountered a much wider array of different personalities. Suddenly I realised there was a wider world out there than just being a good Jewish girl. And out here, I could do whatever I wanted.

Pooja:  When I was about eight years old, my maternal grandfather passed away and it was the first time I was told that women were not allowed to perform certain rites in the funeral. It was then that I realised that I lived in a world where women and men couldn’t do exactly the same things. But I remember thinking, “Who is going to stop me from doing exactly what I want?”

What was the first thick beat that you really resonated with? Why?

Pooja: It was hearing “Rumpshaker” by Wreckx-N-Effect at Killimanjaros on Boat Quay on the 27th of Nov 1998. It was my 18th birthday and I had never before experienced anything quite as euphoric as a whole room full of people chanting to the same beat and the same song.

Jessica:  Kanye West’s album, 808s & Heartbreaks, straddled too many genres for me not to notice it. It was an album of lovesick, heartbroken ballads. I knew that sort of music very well from the blues and roots music I loved. When I realised this music could be teamed with dexterous lyrics, cheek and swagger, I was sold.

While some hip-hop and gangster rap are expressions of protest, there are some that have themes of gratuitous violence and sex. Given your strong interests in social justice, how do you reconcile both sides of the genre?

Jessica: There’s nothing wrong with writing about violence or sex. The problem is performing violence as well as non-consensual sexuality. It is important for people to recognise that all rap artists have the ability to write fiction. Just because their lyrics are presented passionately or crudely doesn’t mean this particular person did those things. But, evoking a world where people behave in this way is important, because it does exist. It holds a mirror to life, where the colour of your skin might determine the education you receive, your treatment by the criminal justice system, and your ability to survive a traffic stop. Like the best literature, rap music forces us to think deeply about our values.

Pooja: If you are living in a community in which you constantly feel the threat of violence and aggression against yourself and against the people that you love, it’s not surprising that the art that you make would reflect this reality.

I think the question we need to ask is: What’s the bigger problem? The violence in the lyrics, or the fact that there are entire communities in that position to begin with? I also think that sometimes when you’re up against a wall, the only way to exact change is to skip the perfunctory polite conversations and use anger instead. Writer and civil rights activist Audre Lorde says that anger expressed and translated into action, in the service of our future, is a liberating and strengthening act of clarification. Anger can be a powerful source of information and energy, and that for me is hip-hop at its best.

While both of you are no strangers to theatre, you are primarily known as writers. What is one thing that actors can learn from writers and vice versa?

Pooja: I am discovering the ridiculous amount of stamina you need as an actor!

Jessica: And in particular: actors who can also dance! HOW DO THEY DO IT?

Pooja: There’s also that interesting tension between thinking about the text as a performer and wanting to constantly tweak it as a writer. The thing about wearing both hats is that you can keep shaping the piece infinitely, which can be both exhilarating and exhausting.

Jessica: Any creative process is a beautiful tussle however, and I’m enjoying this internal tussle very much.

As this is a very personal play, are there any personal discoveries about yourself or each other that have arisen in the course of rehearsals?

Jessica: Pooja introduced me to her hairdresser and I love him. Now I have to fly to Singapore every time I want my hair cut.

Pooja: Jess wears print on print with so much swagger, it is ridiculous.

What is one thick beat that everyone should listen to right now?

Jessica: Nicki Minaj’s “Feeling Myself”. It’s an essential reminder for self-love during a time of struggle.

Pooja: Kendrick Lamar’s “Alright”. It’s the hope we all need in a difficult time. 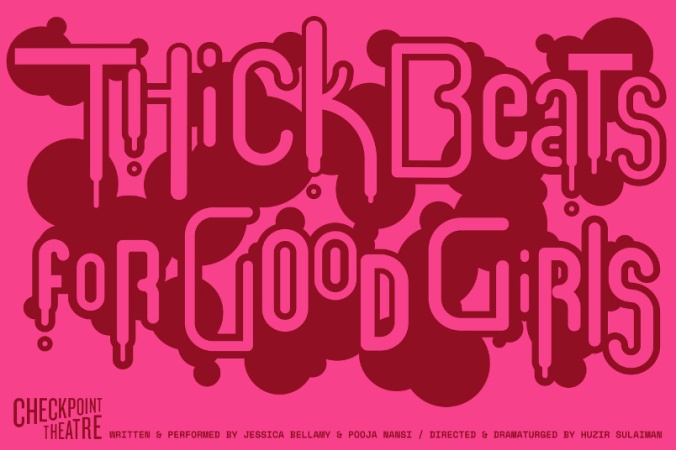