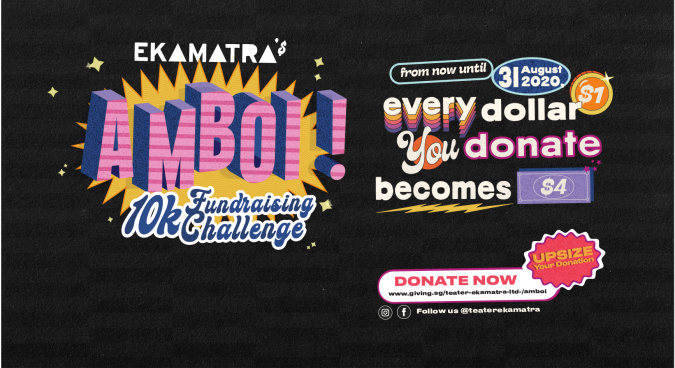 Titled AMBOI!, a colloquial Malay word that expresses wonderment, the fundraising challenge will run from 24 July till 31 August 2020.

It has the unique effect in which every dollar donated will be multiplied four-fold. This is made possible by a private donor who has generously committed to match dollar-for-dollar up to $10,000. The total amount will then be doubled through the Cultural Matching Fund. This will translate into the company being able to receive $40,000 should they be able to achieve the fundraising target.

Furthermore, reaching this fundraising milestone of $10,000 will “unlock” a special reward in the form of a free mini festival of performances via Zoom on 25 September 2020. The two-hour session will feature performances by surprise guests and collaborators of Teater Ekamatra as a way to thank all donors who contributed to the AMBOI! fundraising challenge.

“As a word with multiple meanings, AMBOI! is an apt rallying cry to galvanise the community with the same spirit of playfulness, thrilling delight and creative expression that is associated with the work of Teater Ekamatra. We hope this fundraising challenge, with its 1:4 feature, will inspire more giving. It’s equally a challenge to ourselves to keep finding ways to carve out space for the ethnic minority voice in Singapore in the years to come.”

If you would like to support Teater Ekamatra’s artistic endeavours, please donate generously via their giving.sg campaign page. This challenge runs from 24 July till 31 August 2020.