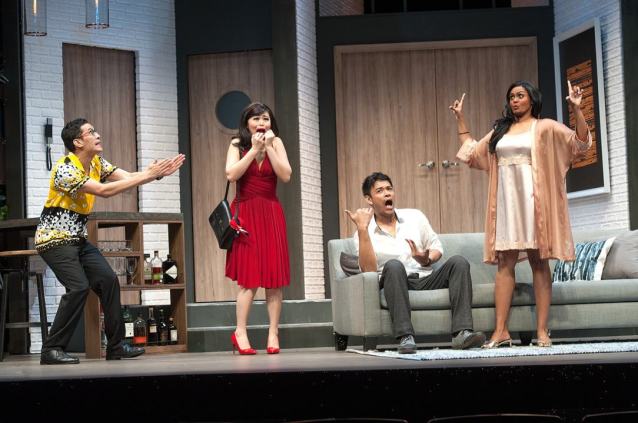 Boeing Boeing is the latter. However, director Pam Oei must be commended for not merely turning it into a tent-pole production that the company trots out every few years.

Glen Goei, Oei’s directorial predecessor, has paved the way by re-contextualising Marc Camoletti’s old-fashioned plot—of an architect maintaining affairs with three air stewardesses based on his faith in airline schedules, and the loyalty of his maid, and friend from university—for Singaporean audiences. Oei, having performed in Goei’s staging, makes her mark by pushing her actors to showcase the hallmarks of a farce, and what makes the show such a delicious guilty pleasure.

For starters, she literally pushes the actors closer to the edge by approving Eucien Chia’s set design. Chia takes the intimate space of Victoria Theatre, and makes it even smaller by having the set farther down-stage. With numerous doors fanning out towards the audience, one is pulled into the action. One wonders which one would open, and secretly hopes that it does at an inopportune moment just to see how Bernard, the architect, weasels his way out of the situation. The smaller playing space also makes it more difficult to distract one stewardess, while shooing another one out.

Additionally, Chia’s industrial aesthetic, which is softened by an earthy palette of the furniture and doors, is an urbane and clever complement to the colourful carousel of amorous dalliances that takes place in the show.

While Oei, as director, no longer needs to wear a form-fitting uniform for the show, she does not loosen the corset on the performative elements. After taxiïng to the runway with the introduction of Jeanette (Oon Shu An) from Singapore Airlines (SIA), and Bernard (Rodney Oliveiro) boasting to Roger (Shane Mardjuki), his university friend, about his smooth operation, the show takes on the speed of a Concorde.

The breakneck speed of the physical antics, executed so flawlessly by every single actor, is no mean feat. Rarely are we treated to such a well-coördinated comedy at an early stage of the run.

Jeanette (Oon Shu An), the materialistic Miss SIA; Jayanthi (Rebekah Sangeetha Dorai), the strong-willed but down-to-earth Miss Air India; and Jin Jin (Judee Tan), the patriotic but mawkishly romantic Miss Air China induce raucous laughter by playing their stereotypes to the hilt. Even though naturalism is not expected in a farce, the women endear themselves to the audience in the brief moments when snatches of their personality peek through the stereotypes. Kudos to the three actors who seamlessly juggle both aspects wonderfully.

The intensity of Shane Mardjuki’s Roger peaks too early, but he manages to maintain it without spiralling out of control. Despite being in awe of Bernard’s international harem, the boy from Kuching proves more adept at keeping up the charade, while pursuing his own interests.

Bibeth Orteza, as the beleaguered maid Rosa, brings much mirth as she punctuates the show by exclaiming, “It’s not easy!” While it is overused, Orteza’s energy and keen sense of timing provides a welcomed break from the flurry of activities among the other characters.

Despite nailing the physical aspects of the show, Rodney Olivero does not add much to the paper-thin character of Bernard. When Roger tries to hint to him that his plans have gone awry, his incomprehension is one-note which stifles the comic potential of the scene. Furthermore, the rapidity of the scenes sometimes proves too much for Olivero as he accidentally calls Jayanthi, Jin Jin at one point. Unfortunately, his scene partners decide to ignore it and forgo an opportunity for improvisation.

In the programme notes, Oei mentions that she wants to offer her audience a “respite from the cares and confusion of the world.” Therein lies the key to the show’s success—working hard to have that light touch. While there are many limitations to the conventions of farce, this iteration of Boeing Boeing ensures that one does not dismiss it right off the bat.

“Review: Boeing Boeing by W!ld Rice had audience holding on to their seats!”  by Chris Edwards, The Honeycombers