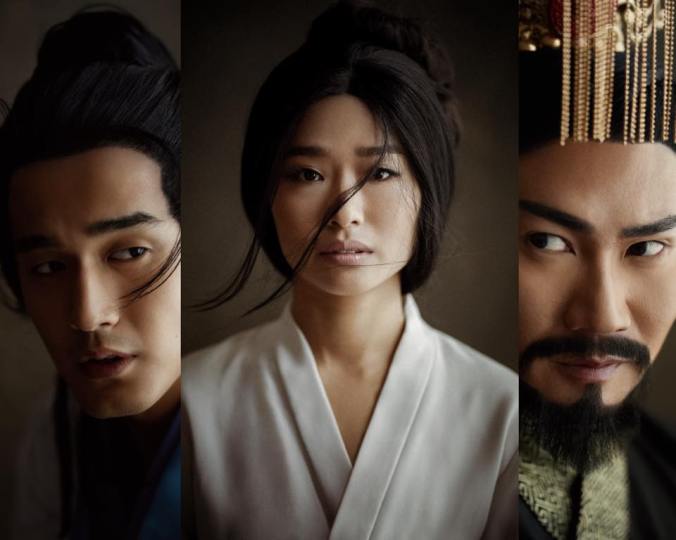 The six-year birthing process of The Great Wall: One Woman’s Journey—which depicts the folk tale of Meng Jiang Nü’s journey to the Great Wall after her husband, Fan Qi Liang, has been conscripted for its construction— is a refreshingly long, but arduous one. But unlike an actual baby, any kink can be rectified, and a rebirth can be arranged.

Despite careful preparation by producer Grace Low and her creative team, it is unfortunate that Low’s brainchild has slightly weak bones. Jean Tay’s book is torn between allowing Meng to drive the action or to use the tale as a platform to show the power of stories which outlast any empire.

The latter strategy is seen in Fan being a scholar, who defiantly carves classic poems into the wall in opposition to Qin Shi Huang’s efforts to rewrite history and his legacy, and various characters stating when and how they met Meng as a device to move the story along. While either strategy has great potential, alternating between both makes the show schizophrenic.

Furthermore, certain dramatic moments are not given the time and space to breathe. The two main ones are the blossoming romance between Meng Jiang Nü (Na-Young Jeon) and Fan Qi Liang (Nathan Hartono) (accomplished in the span of half a song), and Fan’s arrest. Despite decent performances from the couple, we are hardly invested in them as one wonders why Meng even bothered to make the odyssey in the first place (a decision made in record time).

Aaron Khek’s and Ix Wong’s inspired choreography draws from the movement dynamics of Taiji and concepts in Chinese philosophy. The fluid quality of the movement sequences have an ephemeral quality that is apt for the spirits tormenting Qin Shi Huang, and the various people that Meng meets. However, the performers appear to be hemmed in by the lack of space in bigger scenes.

Similarly, while the various design elements and scene transitions are thoughtful, and successfully overcome various limitations, this show is screaming for more space. The lack of grandeur, especially when it comes to the wall, is a little jarring. That said, do watch out for how the dead is entombed within the walls as it is exquisitely haunting.

Despite having slightly weak bones and being a little petite, it will be remiss of me not to report that it is still a healthy child with much potential.

The brightest lights of the show are undoubtedly George Chan as Qin Shi Huang and Na-Young Jeon as Meng Jiang Nü.

Chan benefited from having been part of the process since 2012, as he offers a wonderful and humane portrayal of a tyrant struggling with his inner demons, while being utterly determined to hold on to power. Such a take on the first emperor of a united China is rare, and I would love for a musical on Qin Shi Huang to be written with Chan in that role.

Jeon impresses on various fronts, as she has to tackle the emotional demands of the show; the physical challenges in depicting Meng travelling over various terrains; and David Shrubsole’s demanding score which requires her to hit both extremes of her vocal register. In Jeon’s Meng, we see a refined and demure lady that is led by love and devotion that has a Medean intensity. Yet, despite being in the throes of utter sorrow, she still has the wits about her to ensure that her husband has his dignity restored to him.

Shrubsole’s music is possibly the only element that gives the show the grandeur it deserves. From identifiable conventions (lyrical ballads or percussive Chinese music) to the slightly experimental, it is clear that he composes according to the emotional beat of the story. His lyrics can be quite poetic, but the nuances are sometimes lost in a flurry of harmonies and stage action.

While the show has considerable weaknesses, the boldness of the undertaking must be acknowledged. As long as the creative team adopts Meng’s derring-do in deciding how the story must be told, and aided by more resources, The Great Wall has the potential to scale greater heights.

“Houston, we have a problem” by Christian W. Huber, Centre 42 Citizens’ Reviews

“The Great Wall Musical: A Moving Tale” by Our Parenting World