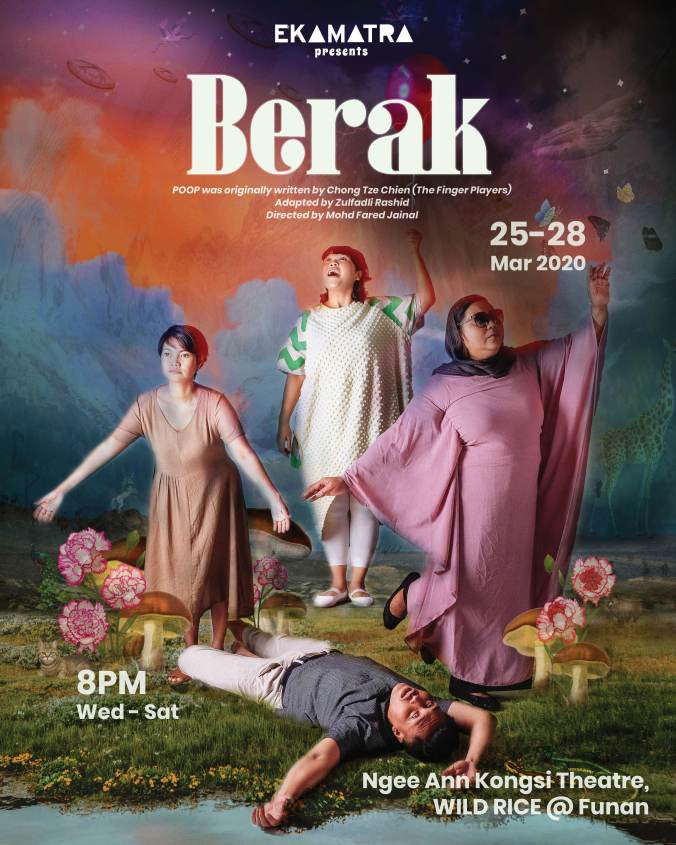 To kick off their 2020 season, Teater Ekamatra presents Berak, a transcreation of Chong Tze Chien’s Poop!, which chronicles an aftermath of the suicide.

I spoke to transcreator Zulfadli Rashid (ZR) and director Mohd Fared Jainal (MFJ) to find out more about the piece and what drew them to Chong’s original play, which can be considered a modern classic in our theatre canon.

The work is described as a transcreation of Chong Tze Chien’s Poop! Could you explain what do you mean by “transcreation”?

MFJ: Transcreation is becoming quite synonymous to our line of work at Ekamatra. Apart from creating original plays, we find originality within these scripts that resonate strongly as viewed through the lens of an ethnic minority.

In Harap (2017), it was about suicide and homosexuality; Potong (2018) talks about dementia in the family with a transgender character; and A Clockwork Orange (2019) was about violence.

Poop! is a great play written by Chong Tze Chien and it’s one of those that strike an emotional chord based on the plot and premise—a broken family whose father committed suicide and a daughter fighting cancer and on the brink of her impending  fate.

What drew you to transcreate Poop! in the first place?

ZR: I watched Poop! a few years ago. I remembered that I left the theatre with such sorrow. No silver lining, no moral of the story. Still so beautiful. I loved how honest it chose to be. Then, sometime in 2018/2019, Shaza asked if I was interested in adapting Poop!  I just had to do it.

MFJ: As depressing as it may seem, on a micro level, these characters represent people who have lost so much—dignity, will, trust, identity, and the meaning to live. They could be our family; friends; neighbour; colleague; the person sitting opposite us in the train; the taxi driver; the stall owner; the man in suit; the lady on a bicycle. Just anyone.

But on a larger view, it reflects how the system is causing people to struggle, to have a skewed perspective and face death way before we are boxed up.

Are death and berak taboo subjects in a “Malay” cultural context and in Islam? If so, could you elaborate on this?

ZR: I don’t think the Malays view these things as taboo. We talk about both death and passing motion all the time, but some do it  “beralas” (Malay-styled euphemism).

Islam also does not view these subjects as taboo. Death is merely a rite of passage for a human being, and it is not the final destination. How one dies, however, will determine one’s fate in the afterlife.

MFJ: About 98 per cent of Malays are Muslims by default and these plays may contain difficult issues or taboos that do not sit comfortably to some. However, they deserve the attention as we continue to represent a wider spectrum of people within our community. It may not lead us to any solutions, but the bottom line is to acknowledge and say that some people need more help than others. Let’s not sweep it under the carpet.

Are there any interesting discoveries that occurred in the process of transcreation and rehearsals?

ZR: I am always discussing with Fared and Safuan (the sound designer) on how to ensure that Berak is not merely a translated play performed by Malay actors. Berak must exist in a Malay universe with all its absurdities and peculiarities. Only then, I feel that we can have an honest conversation with regards to the play’s subject matter.

MFJ: Zulfadli Rashid (Big) is a bilingual writer who has strong sensitivity towards the Malay language, culture and psyche. He has been brilliant in trans-creating the works at Ekamatra, especially Berak. However, the creative input is not just limited to the playwright or director. Actors, designers, managers and crew help to carve and colour that world, and make it as authentic as possible.

Perspectives definitely change and heightened once culture is brought into the picture. The process of transcreation gives us the artistic licence to build a world within our own parameters and identity.

Update: This performance has been cancelled due to the COVID-19 pandemic.