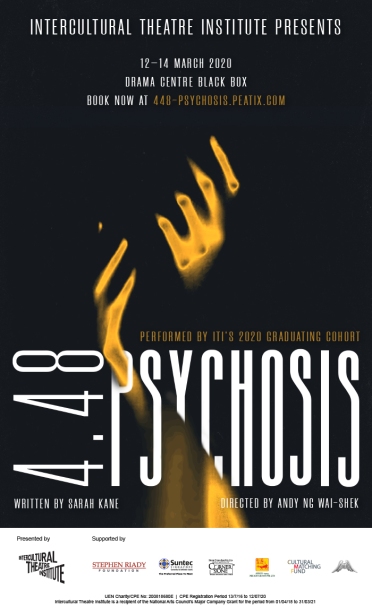 In slightly over a week, the graduating cohort of Intercultural Theatre Institute (ITI) will present the first ever multi-lingual adaptation of Sarah Kane’s 4.48 Psychosis. I spoke to director Andy Ng Wai-Shek, an award-winning practitioner from Hong Kong  and alumnus of ITI’s pioneering batch, to find out more about the production.

How does it feel to return to your alma mater as a guest director? How has ITI changed over the years since you were a student?

I still feel very much part of the school even though I have met different faces. There is a vibration that keeps reminding me this is where I came from. After 17 years, I’ve come to realise how this programme isn’t just about simply doing theatre — it’s about personal perceptual experiences.

This programme synthesises the differences between cultures; perceptions of different bodily experiences; the possible marriage of body and mind; and, most importantly, the unanswerable question of how to put different training methods into one. It sets a foundation of life-long research for a person in the evolution of his life. In fact, this is the research I’m still doing all these years since my graduation. I suggest ITI can also play a role to encourage the research.

4.48 Psychosis is not immediately thought of as an intercultural work. What drew you to adapt this piece for ITI?

It is already an intercultural work to me when I knew that I had to work with students from Taiwan, Malaysia, India, and Korea. 4.48 Psychosis is more on personal thoughts and feelings than drama. The structure of it drifts on a stream of consciousness. It is logically disrupted. In other words, it can be very personal.

Though the work is in English, I would like them to try certain scenes in their mother tongue. The idea of it is that there are five storytellers telling the story, sometimes deeply immersing themselves into the very thoughts and feelings of “I”. One of my interest when directing is the connection between one’s consciousness and his or her being. Now, the text says it. The actors need to find their ways to reveal it. They show me according to what they can do individually. That’s already intercultural. Given that your actors are from different countries and from all walks of life, were there any interesting conversations about mental health that arose during the rehearsals?

I had depression since last August and have recently stopped my medication. I shared my experience with the students. They shared their experiences with me and their fellow peers. Some students have also consulted a counsellor. I think depression or mental health is already a common issue nowadays, it is just a matter of seeing whether it is serious enough for a person to consult a doctor or not. I am not interested in telling a story of mental disorder. I think the playwright did try her last call for help. Why? I hope that the audience can understand that.

Could you give us a glimpse of what the show would be like? Do you tap on the actors’ intercultural training in your direction of the show?

Five storytellers telling this story, using a psycho-physical approach to develop the work of a visual poem. Yes, some of the scenes to use their intercultural training, but it’s a different look. How so? You will have to come to the show to find out.