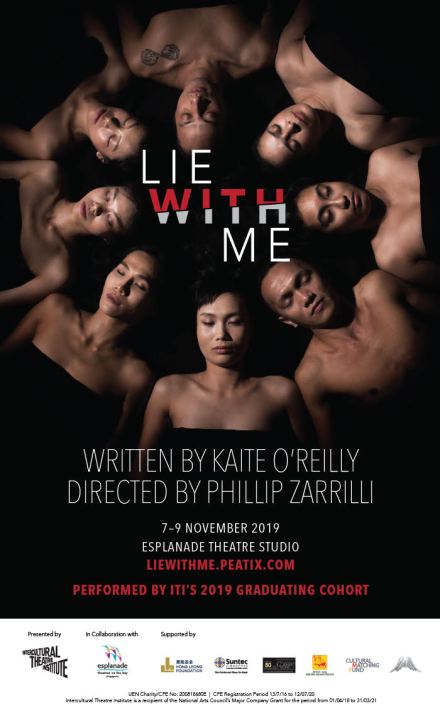 Come November, the graduating cohort of the Intercultural Theatre Institute (ITI) will be presenting the Asian premier of Kaite O’Reilly’s Lie with Me.

Originally set in London, this production will be localised to look at contemporary life in Singapore through glimpses into the lives of eight young people, exploring issues such as the evolving ‘rules’ of sexual encounters in a ‘swipe right’ culture, and the ways in which people survive and form genuine relationships in an increasingly unstable and consumerist society.

To find out more about the show and the creative process, I spoke to O’Reilly (KOR) and director Phillip Zarrilli (PZ).

What are some of the difficulties in adapting Lie With Me to a Singaporean context?

KOR: I believe that creativity comes from problem-solving, so any ‘difficulty’ is actually welcome. Adapting an existing script for the Singapore context was illuminating and hugely enjoyable, as I had the whole cast involved, researching topics for me, assisting with any slang, ensuring the language felt ‘right’ in the mouth. The adaptation might have been challenging were I not in Singapore and so able to check material with the company and seek local knowledge and advice whenever I needed it.

The process of creating this piece is complex in that the you are working with an international cast while adapting a play that was initially set in London to speak about contemporary life in Singapore. Are there any interesting discoveries or conversations that emerged out of the rehearsal process?

KOR: There are obviously some historical, cultural, and social differences between London and Singapore. We discussed everything from gay marriage to employment practices, adjusting one of the character’s storyline so it echoed the relationship with migrant workers in this geographical context. But people are people—there are more similarities than differences. I think the conversations confirmed for me how challenging contemporary life is for young people from every part of the world—from the complex evolving dynamics of work, family and relationships in the digital age, to the notion of truth, responsibility and integrity in this world full of ‘fake news’ and ‘alternative facts’.

Phillip, you are known for using martial arts and yoga to train your actors. How do these art forms feature in the process of creating this show?

PZ: Two years ago, I spent two weeks at ITI with this group of actors and shared with them the process I have developed in training actors using Asian martial arts and yoga. Six weeks ago, when I arrived back in Singapore, we began our rehearsal process by reviewing this training, and we use the training as a 45-minute warm up before we begin every rehearsal.  Throughout our process of rehearsing Lie with Me, I have drawn on the key underlying principles of the training I teach—coaching the actors with regard to attention and awareness.

As the actors are trained in a myriad of art forms across various cultures, are you tapping into their training to create this show? If so, how?

PZ:  In their third year, this group of ITI actors  have amassed three years of studio encounters with a wide variety of traditional Asian performances genres as well as with contemporary acting/movement/voice training. These shared training experiences have provided a firm foundation for our work on Lie with Me because they share the same basic underlying principles that inform the training that I have developed. To take one example, Japanese noh performance gradually opens up the performer’s awareness of her feet with its emphasis on the basic ‘noh walk’. This ‘foot awareness’ can be very useful to the actor to  stay centred and grounded in performance.

If you can only offer one reason for audience to watch Lie With Me, what would it be?

KOR: I think it is always exhilarating to see work by those emerging from their training, like butterflies from their cocoons, spreading their wings, about to take flight into the world. I’m always interested in seeing the future makers of performance and culture as they cross the threshold into professional work.

PZ: Come and engage with a group of emerging actors/performers who care deeply about what they are doing as artists.

Lie with Me runs from 7–9 November 2019 at Esplanade Theatre Studio. Tickets from Peatix.